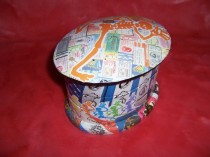 The Access All Areas Stash Box is an egg-shaped﻿ three-tier box that slides open in a circular motion, stepping out with a big dancing skeleton on top. The skeleton also shows up in the ticket stub collage on stubs from the Grateful Dead's '89 run at the Great Western Forum in LA--really kickin’ Brent shows. A collection of backstage passes gather around the bottom of the box, including a few favorite images: a space shuttle, the Shakedown man swingin' his pocket watch, and a mystic Mayan design, plus there’s a drawing of a skeleton driving a purple VW bus at breakneck speeds.

On one side of the box, Jerry Garcia’s face, in a melancholy blue, slides apart into three pieces. On the other side is a row of soundboard reels from the Grateful Dead Vault. When the Access All Areas box is opened, the reel labels separate into three parts: a stealie on the top tier, the alembic sign in the middle, and handwritten dates from the Europe '72 tour on the bottom tier. (The alembic symbol, a fist descending from a triangular cloud, is an ancient alchemy sign that refers literally to part of a liquor-making still, and metaphorically to an act of transmutation.) The inside of each of the box’s three tiers is lined with soft black velveteen. This is a fun box to open and shut. Dimensions: 7.5” L x 5.5” W x 4.75” H﻿. This box found a happy home!