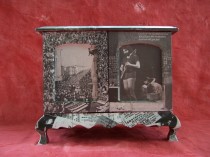 The Coast-to-Coast Stash Box bears black-and-white photos from an array of venues that were graced by the Greatful Dead and their traveling circus of psychedelic fun. The front panel has a piture of a free show that crowded The Haight in San Francisco, and the sides show a rudimentary roadside sign for Alpine Valley, a billboard over The Warfield that reads, "They're not the best at what they do, they're the only ones that do what they do," a lit up Radio City Hall in NYC, The Winterland (formerly The Carousel), and The Wall of Sound, which was astoudingly impressive no matter where it was set up. Ticket stubs are scattered at this box's feet.

The top of the Coast-to-Coast Stash Box displays a theater marquee that read, "Been here so long, got to callin' it home," a St. Stephen song lyric that translates to a Deadhead as something like, "Home is where ever the Grateful Dead are playing tonight." Every box has a secret: this box's secret is on the bottom of one of its drawers, a Jerry Garcia quote that rings true for anyone whose life has been changed by the Dead, "Our audience is like people who like licorice. Not everybody likes licorice, but the people who like licorice, really like licorice." True that. Dimensions: 11.5” L x 5.5” W x 9.25” H. This box got wings for door handles and found a happy home!