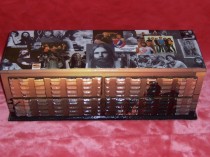 The Sequential Circuits Prophet-5 Stash Box is as impressive as its title in all respects: it's heavy, reverent, and an artistic masterpiece. The front of the box combines two photographs of California into one panorama, creating a visual illusion where a man looks out across a mountain landscape at sunset, while on the other side of the box's frontside, a much smaller man’s silhouette tosses a beach ball into the air. It's as though they are shadows of the same man playing together. The carved details on the drawer fronts have been covered so that the ridges make a ripples in the blended photographs, lending a 3-D effect and a tactile delight.

The topside of the Brent Box boasts a collage comprised of photographs of Brent centered around the epitaph, “In memory of a brother Brent Mydland 1952-1990.” Just above is his baby picture (taken from The Family Album). This glossy collage is a journey through the many bearded faces of Brent, often with his beloved band mates by his side. The sides of the Brent Box feature more photos of The Boys, looking goofy on one side, and spent under a $12 motel sign on the other. In a snippet of an interview with Mickey, he declares about Brent, “Until he saw the beauty in the music, I couldn’t see the beauty in him.”

The Brent Box gets its official title, The Sequential Circuits Prophet-5 Stash Box, from another quote on its left side, “The band invested in some new equipment for Mydland when he joined, even buying him a Sequential Circuits Prophet-5 when they discovered he didn’t have one.” The quote continues on the box bottom, “Unfotunately, after working a while with it, Mydland decided the instrument wasn’t right for the kind of music the Dead would be playing.”

The bottom showcases the original unpolished wood of this box, which seems something akin to a plank from an old ship, and the back shows the same wood with a beautiful red tint polished finish. It’s a very solid box worthy of keeping fine treasures. A Stealie in the dead center of the bottom keeps this box grounded. Every box has a secret in its drawers—this box has two: Brent’s got his fingers crossed, and a caption reveals that the front panorama is a photograph from the Shasta region of northern California, “a land of contrasts.”