Strangers in the Night Music Box 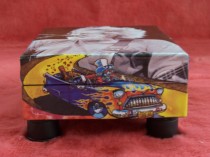 On the front of the box, Uncle Sam is Truckin’ to Buffalo in his US Blues cruiser. He’s also doing a little dance on both sides of the box, surrounded by four color shots of The Boys onstage basking in bright lights. One of these photos shows a green tunnel of light coming from Bobby’s guitar that looks rather suggestive. It’s a fun box that fits together well and has a mini-stealie inside.

Every box has a secret and this one is functional: the box’s feet are actually ginger Cognac bottle lids! Sinatra would’ve liked this box, after all, “It turned out so right, for strangers in the night.” Dimensions: 4.5” L x 6” W x 2.5” H. This box found a happy home in California!