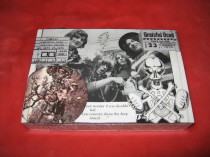 A custom order for Christmas, the Cosmic Charley Stash Box pays homage to a classic Grateful Dead song that they only played a half dozen times. The ticket stubs on the top of this box are from the last two shows where Cosmic Charley was played, in 1976, and the edges are covered in setlists that contain Cosmic Charley. The box's bottom represents the lyric, "Caliope wail like a seaside zoo," which it is fabled was penned by Robert Hunter in reference to the callipoe, an organ-like instrument, that plays when the carousel in San Francisco's Golden Gate Park spins around: this picture is of that very same carousel! Cosmic Charley is discussed by Jerry Garcia during an interview that appears inside the box, where he calls the song a chore to play. Oh well, we loved it anyway, especially the repeating line that rang so true, "Go on home, your Mama's callin' you." ﻿