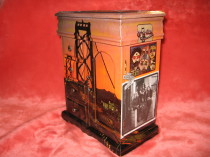 The San Francisco Bay Jewelry Box bears a dramatic sunset picture of the Bay Bridge with traffic streaming into the city, starting on the side of the box, wrapping around the edge, and traveling across the front door and drawers. The right side of the box features a picture of the members of the Grateful Dead in 1965 at the very beginning of their career, on the front porch steps of 710A Ashbury Street, the downstairs apartment to 710, where their friend Danny Rifkin lived -- the reason they all first came to this now infamous address in the Haight-Ashbury district of San Francisco. The left side of the box shows a picture from just a few months later, when the Grateful Dead had taken over the whole house, making it base camp for a wild experiment in sound. (Is that a bazooka that Jerry has in front of him?) The top of this tall box shows a view of the San Francisco Bay from a satellite in space, with both the Bay Bridge and the Golden Gate Bridge visible as tiny lines across the water. The back of the box is a photo of the Grateful Dead playing Golden Gate Park, one of only five shows they played in 1975.

Every box has a secret, this one has two! On the bottom of the third drawer, there's a picture of 710 Ashbury as it looks today. And on the inside of the door, wait, who is that lady? Well, not sure, exactly. The Bay Bridge picture on the front of the box was clipped from an 80s coffee table book about California... Once the front image was affixed, I opened the door and to my surprise, this woman, who was on the back of the Bay Bridge picture, was perfectly aligned with the flower on the glass window pane. She's practicing yoga in an Eagle Pose and wearing a pink polka-dotted bathing suit! Now that's some box magic.

The San Francisco Bay Jewelry Box is an impressive piece of artwork that honors the Bay Area and the psychedelic spirit of the Grateful Dead. Dimensions: 5.5” L x 9” W x 11.5” H. ﻿﻿﻿﻿﻿This box found a happy home in... guess where? Yup, San Francisco!