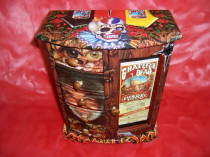 The picture on the front of the heavy weight Creepy Eyes Jewelry Box shows a gray-bearded Jerry looking super serious and showing his dark side next to a full-sized replica of a ticket to the Grateful Dead's October 1990 Germany show﻿. Stanley Mouse’s illustration of a winking one-eyed clown with a thirteen-point bolt on his forehead flashes a creepy grin from the top of the box.﻿

Following a Europe theme, a chronology of the Grateful Dead in the early Seventies is on the left, including the release of the Europe ’72 CD, which supplied some of this box’s artwork. On the right side, the chronology covers the time period that included the Europe 1990 tour, and there’s pictures of Mickey and Phil making eyes “In the Dark.”

Every box has a secret: this box’s is on the bottom of a drawer, a piece of a different ticket from the same show. The Creepy Eyes Jewelry Box﻿﻿ knows the implications of its own weighty stare.﻿ Dimensions: 10” L x 5.5” W x 12.25” H﻿. This box gained some shiny brass handles and found a happy home!