Be Mine Stash Box 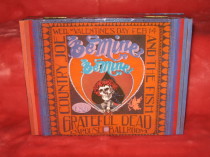 The Be Mine Stash Box features a slightly altered Valentine's Day playbill from a 1968 Carousel Ballroom gig where the Grateful Dead shared the headliner spot with Country Joe and the Fish. Cupid's aiming for Bertha, who has taken the place of Country Joe and is wearing a necktie made of a winged skull grasping two hearts.

Black and white photos of a cheerful Jerry ring the sides of the Be Mine Stash Box, while the bottom boasts another San Francisco concert playbill, this one from an Avalon run that took place nearly a year earlier in 1967. Cupid's found his way into this poster too, as has the little "Light by LSD" tab that seems to have spawned a phoenix fire.

On the inside of the box, a photo from the same time period shows the Boys feigning seriousness in a red glow, but you can tell Bobby's about to crack a smile. The Be Mine Stash Box shows how bright the flame burns for the Good 'Ol Grateful Dead! Dimensions: 9” L x 7” W x 2” H.﻿ This box found a happy home in ATL!