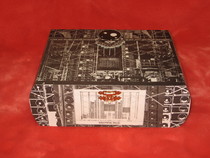 In 1974, the Grateful Dead unveiled "The Wall of Sound," a brainchild of Owsley, a self-proclaimed sound wizard. The elaborate system gave each musician their own PA and double mikes to eliminate echo. The object wasn't necessarily loudness, instead it was, as Bear said, "To raise the level of bossness." The Wall of Sound made the Dead's music come through crystal clear, even in huge music venues. The drawback? It required 26 crewmen working 14 hours to install it. This meant that, for the purposes of constant touring, it had to be duplicated. Five semi trucks played leapfrog all summer... until use of the Wall of Sound had to be discontinued due to impracticality. The Wall of Sound Stash Box pays homage to this "acoustic nirvana." This box found its owner at the Dark Star Jubilee '12 and went home to Toronto, Canada.