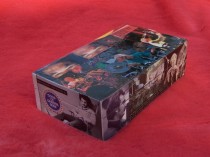 Bill Kreutzmann was there in the very beginning, 1964, when The Warlocks were formed. The next year, they became the Grateful Dead and Bill played drums with them for their entire thirty year career. He's still playing today, with his new band 7 Walkers, who continually take it a little bit further than we've gone before. The 'Rockin K' Stash Box honors Bill with a collage of pictures and quotes. On the top, Bill is quoted as saying, "Everything is relative to the center of it all, which is music in motion through time and space." Every side of the box has a Bill quote, except the left side, from which the box takes its name: Bill's looking like a bad-ass kicked back in a rocking chair: he's the Rockin' K. This stash box is well-constructed of thick wood. Every box has a secret, this one's is that you can fit a whole elbow in it! (Featured inside: Mickey, Phil, and Bill in a picture from the "Elbow Sequence"). As Bill says on the back of the box, "The Grateful Dead have proven that you can get there from here." Dimensions: 7” L x 3.75” W x 2” H.﻿﻿﻿ This box found a happy home in sunny California!