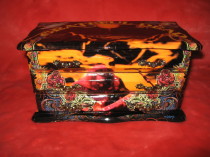 The Trip Freak Jewelry Box has a dark, yet playful vibe, brought on by Jerry Garcia standing center stage with his head bowed, deep in a noodling trance. He's framed by lilies and rose vines, and an orange mountain backdrop that brings "Dark Star" to mind. The tagged car on the right side of the box says, among other awesome things, "God uses LSD." On the opposite side, there's Frankenstein blotter art from a late 60's show poster that announced "Trip or Freak," with a double vision Mars Hotel thrown in the mix for fun. The boys (with Brent) are all visible during a show at the Greek Theater in a photo on the back of the box with a crazy wavy tie-dye covering the wall of sound. The Trip Freak Jewelry Box has two beige-velveteen lined drawers and the top lifts up to reveal a vanity mirror, nine storage cubes, and four slits for holding rings.

Every box has a secret, and this one will give you chills: on the bottom of the middle drawer, Jerry's quoted as saying, in part, "Sometimes there's light at the end of the alley, and sometimes there's a black hole." The Trip Freak Jewelry Box wears the artwork of Mike Dubois, swallows its own tail, and waves a psychedelic wand at its trippy little world. Dimensions: 10.5” L x 5” W x 5.75” H. ﻿This box found a happy home in Vancouver, Canada!