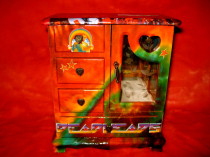 The Pride Jewelry Box is simply named because it shows its symbolic pride in many things, among them liberty, America, freedom, fortune, and a dedicated love of the music of the Grateful Dead. A bright spectrum tie-dye background is swept across the front of the box, which is adorned with hearts and stars and pots of gold at the ends of the rainbow, and the proud word "Deadheads."

The Pride Jewelry Box features four drawers for your goods, plus a spectacularly wide opening door into a gray-velvet space where rings and hanging things can be stored. Jerry's got his rainbow pants on in a picture on the right side of the box, sharing space with the Prankster's Furthur bus and Uncle Sam's classic flaming car, a contrast in vehicles that evoke such different American dreams. On the left side, a pride theme forms with the Statue of Liberty, who's adorned with a wreath of roses, coupled with a Furthur tour poster bearing the torch's eternal flame and a dancing dude that looks like he's hoisting a special type of lit magic. Fourth of July-inspired firework lights explode on the back of the Pride Jewelry Box in a photograph from a Berkeley Dead show. On the top of the box, Jerry's caught in rare form wearing a red Stealie T-shirt, bringing to mind the premonition, "Jerry's in Red, Trouble Ahead."
Created especially for the turbulent political times of an election year, the Pride Jewelry Box reminds us of the old Don Rollins song, "The Race Is On," a favorite of Jerry's, which includes the lyrics, "The race is on and here comes pride in the backstretch..." This box even has a bumper sticker that reads "Jerry for President." The Pride Jewelry Box hops on the bus and rides the rainbow wave, just to see where it goes. Dimensions: 9.5” L x 5” W x 10.5” H.﻿ This box found a happy home!