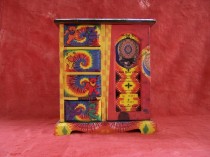 The Tie-Dye Bear Jewelry Box features a life-sized replica of the ticket for the Grateful Dead 1990 New Year’s Eve show, which has a silver Stealie with a rainbow fractal inside the skull on it. This is a cheery four-drawer box covered in colorful dancing bears. When you open the door and look at the box from the side, four of the '90 NYE tickets fan out in a rainbow of tie-dye.

The background on the front of the Tie-Dye Bear Jewelry Box﻿ is a picture of a brightly painted wall; if you look closely you can see the shadow of a woman's head on the wall. The top has a mellow older Jerry playing guitar and a giant purple dancing bear. The left side of the box has both a VW bug and a VW bus, which is full of bears hanging out the windows and shouting, “On the Road Again!”

Every box has a secret: this box's secret is on the bottom of a drawer, a picture of Phil playing bass and grinning in a bright rainbow tie-dye T-shirt. This box makes people smile.﻿ Dimensions: 8.75” L x 5.5” W x 10.25” H﻿. This box found a happy home!