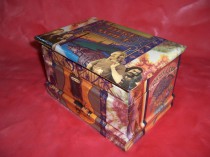 The Dire Wolf Jewelry Box has a top lid illustration that sets the stage for this slick box with a visual interpretation of the beloved Grateful Dead song by Alton Kelley and Stanley Mouse . The wolf appears to be stalking a pigtailed Jerry, but Phil and Bobby are looking down at the sneering beast and laughing it off. The autumnal tones of this box are united by tye-die.

On the right side of the box, a Fall ’89 backstage pass, bearing the Grateful Dead thistle and a Stealie ladybug, sides up to the drawing from Dead Set where Bertha and Uncle Sam sit back-to-back overlooking the Brooklyn and Golden Gate bridges. The left side and front are graced with two of Jerry’s guitars, Tiger and The Wolf. The fanged Wolf on the bottom of one guitar lines up front and center, protecting whatever you put in this box.

Wrapping the corner between the two guitars is a wolf skeleton who’s toying with three green pyramids of decreasing size. When the Dire Wolf Music Box is opened, the musical cylinder and metal comb play the theme from the 1970 movie Love Story. The inside is lined with mustard yellow velveteen; around the lift-out tray, a previous owner has painted the trim a complimentary peach.

The Dire Wolf Music Box has a mysterious secret: on the bottom of the lift-out tray, a sunglasses-wearing red skeleton kneels with his hand raised to offer up a piece of bent wire, as a fanged wolf skeleton sneaks up behind him. It's part of a drawing that's been credited as "Anonymous." Even though it makes little sense, all this box has to say is, “Come on in.”