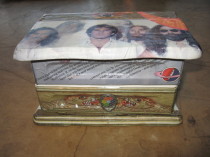 A glowing review of the Grateful Dead's Go to Heaven album appears on the front of the Go to Heaven Box﻿. It says, among other things, that, “you’ll go stark raving mad over the group’s new album.” The Go to Heaven album cover photo shoot provides two pictures featured here. The Boys are arranged differently from the smoke-filled picture on top of the box to the shot on the side of the box, where Phil’s looking mighty goofy sporting some big-ass glasses.

One year after the release of the album Go to Heaven in 1982, Space Shuttle Columbia launched. On the side of this jewelry box﻿, the fiery trail of the space shuttle as it appeared on a Grateful Dead backstage pass just barely grazes Jerry Garcia’s head as it crashes toward Mickey Hart.

The cover of the bottom drawer and the edges of the box feature the golden frame of Alex Grey’s painting “Writing” (a calendar version of the painting), with images of penetrating eyeballs and tongued dragons. The inside of the Go to Heaven Box is white velveteen that is in immaculate, like-new condition.
The bottom drawer was updated with a Steal Your Face hatpin drawer pull that is color-coded to represent the chakras within the Flower of Life.﻿ A pimp little box with a lot of attitude. Dimensions: 7.5” L x 4.25” W x 4.25” H.﻿﻿﻿ This box found a happy home in upstate New York!